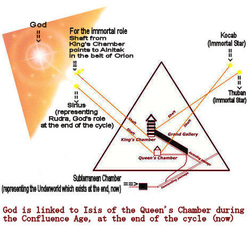 The link through the northern shaft of the King’s Chamber represented that the King's soul had begun his journey to travel to the “stars that never die”. This meant that the king had begun playing his immortal role (during the afterlife) and that he will reach the world of the Confluence Aged stars (that would exist at the end). Then, the soul would play the role of Horus so as to attain immortality for the soul. The immortal role of Osiris would help Horus to win the battle, at the end. This was originally seen as a noble and righteous aim because it did not involve giving immortality to birth-roles. It just involved the immortal god roles which would influence the soul, at the end. 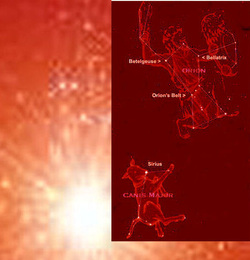 When the Copper Aged soul begins his journey, into the afterlife, it was as if has been given the sky as his abode, so that he could play his immortal role from there (while keeping an eye on what was happening on earth). Even the souls who were in the Confluence Age, at the end, were portrayed as being in the sky because of their elevated state. Thus, it was as if Osiris would be able to help Horus since both were in the sky. This was also a reason why God, the Copper Aged souls and the Confluence Aged souls were associated to stars, constellations, the sun and the moon. Since the role of Horus takes over from Osiris, Plutarch saw the constellation of Orion as representing Horus. The northern shaft of the Queen’s Chamber was closed because the  role of Isis would not be attaining immortality at that time (in the Copper Age). The link through the northern shaft of the Queen’s Chamber was the final aim. It was to make sure that  the soul attains immortality. It also represented that the soul will attain immortality in the Confluence Age, at the end of the cycle. When the soul attains immortality through this, it is as if Horus gains victory over Set. This meant that the immortal role of Osiris, which was connected to Set, would come to an end. Thus, Horus takes the place of Osiris in the sky. The victory of Horus, over Set, also represents the deity soul’s victory over the vices. Set was also associated to the vices because the vices influence the souls in the underworld.

The ancient Builders were having the aims of trying to recreate the divine world as it had happened at the end of the previous cycle (which is around 3000 B.C.). Thus, the northern shafts in the King’s Chamber and Queen’s Chamber were aligned to the immortal stars (Thuban and Kocab), as the stars would be in the sky at the end of the previous cycle.

The role of Osiris is played first and is used to influence the soul to play the role of Isis. Thus, the northern shaft in the King’s Chamber was left open and aligned to Thuban as it would be at the end of the previous cycle (at around 3000 B.C). The soul was actually influenced to play it’s role of Osiris even in my previous birth when I became a ghost so as to play my role well in this birth.

The shafts were aligned to stars as they were, because it involved setting the scene for it to happen (as per the plan). This was also a reason why the Great Pyramid was used to represent the world which existed at the end of the cycle. The basement or subterranean chamber beneath the Great Pyramid represented the Kaliyug world that would overlap with the Confluence Age and the Golden Age.
The Great Pyramid was actually built between 500 B.C. and 600 B.C. Star alignments, of different times, were also used to keep people wondering and talking about the Pyramids until it is time for the mapmakers to explain what they had done around 2500 years ago.